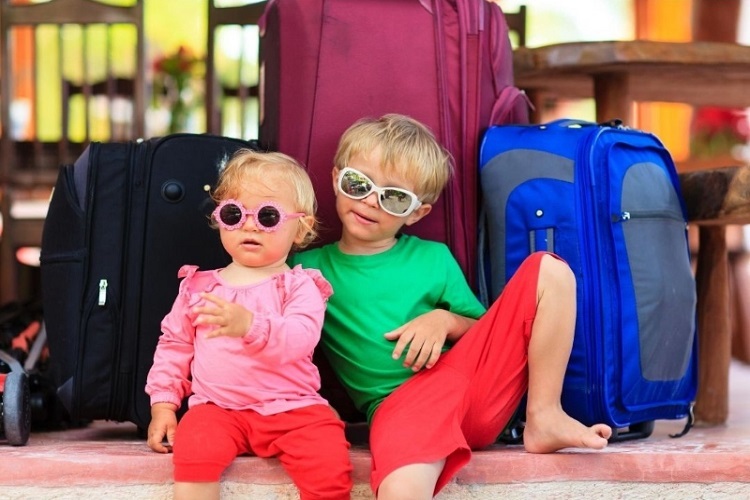 Traveling with baby can be fun

As most parents I was petrified when I had to travel for the first time with my baby. She was 5 weeks old and it was a bit more than a trip. We moved from Vienna, Austria to Beijing, China.

26 flights later including 9 long-distance ones I can tell you: it can be fun… sometimes. We have travelled as a family most of the times but I have also flight on 2 long-distance flights alone with our baby. I survived and we even had a good time.

Here is what worked for us:

1/ Wear her in a baby wrap or a baby carrier (face to my chest).

Airports and airplanes can be overwhelming even for us adults, imagine for a 2 months or a 12 months old. I believe that my daughter has been such an enthusiastic traveler because she felt secured by being wrapped on my chest. Moreover, she was in control of when and how much she wanted to engage with the environment around her.

2/ Describe the journey and how it’s going to be

A couple of days before the trip and then the day before we would sit down with her and explain what it’s going to happen: “we are going to pack the luggage, go to the airport by car, do the check-in … ” and so on. We would describe the journey and the different stages and would tell her what we expect from her: being as patient and calm as possible. Just before leaving to the airport we would do a quick reminder: « Remember, now we are going to the airport by car. When we arrive there, we will do the check-in…. »

And yes, we did that even when she was 2 months old. A person is a person, even if it’s a little one.

I think most of the times it was much more than what we needed, but I preferred to carry more than to have to handle a stressful situation. Here is what we put in the bag:

– a thermometer, homeopathic pills for cold, fever, teething and some paracetamol for babies as well (even if I never used it)

– food and water (when she was older than 6 months). Real food actually. We did the baby-led solids so we would usually bring things like avocado, cooked pasta, cooked vegetables and fruits. Try to avoid pasta with tomato sauce 😉

– some books and objects to explore. But she almost never used them in the plane. Spoons and cups and any other objects on board seemed to be of a greater interest for her than things we brought from home.

– everything we needed for the change and extra diapers in a small bag that was easy to slide on the wrist.

4/ Plenty of breastfeeding (or liquids and cuddles)

Pediatricians usually advise to nurse the baby during take off and landing and I think it’s an important piece of advice but I have to say that I didn’t wake her up if she was sleeping peacefully. I think that she would have waken up by herself if her ears were hurting her. Breastfeeding her on demand in airports and during the flight had probably brought her a lot of confort too, besides the food. You can probably get the same result with a bottle too if you add plenty of cuddles and baby wearing.

…good or bad. I know it’s easy to say, not so easy to do. We had some exhausting flights and we also had some amazing ones, when we just set the intention of just going with the flow. As my husband puts it « On est jamais à l’abri d’une bonne surprise », which I would translate it « We are never away from a good surprise ».

Once we « mastered » the practical side of travelling with a baby (number 1 to 5) we were ready to add some fun:

Let the baby engage with the crew.
My daughter seems to have so much fun during flights. Maybe because we travelled so much airplanes and airports are like a second home for her, I don’t know. Now she says « hi » now and waves her hand to the crew when we enter the plane. When she was 6 months old, she got to meet the pilots because the Chief Flight Attendant took her on a stroll. On the Asian Airlines the flight attendants were always ready to babysit and play with her

And if the flight turns out into a nightmare and your baby starts screaming like there is no tomorrow, let daddy handle it. Based on my observation, people seem to smile more when daddy is comforting a crying baby, flight attendants seem to be more helpful when daddy is changing the baby. Funny, isn’t it?