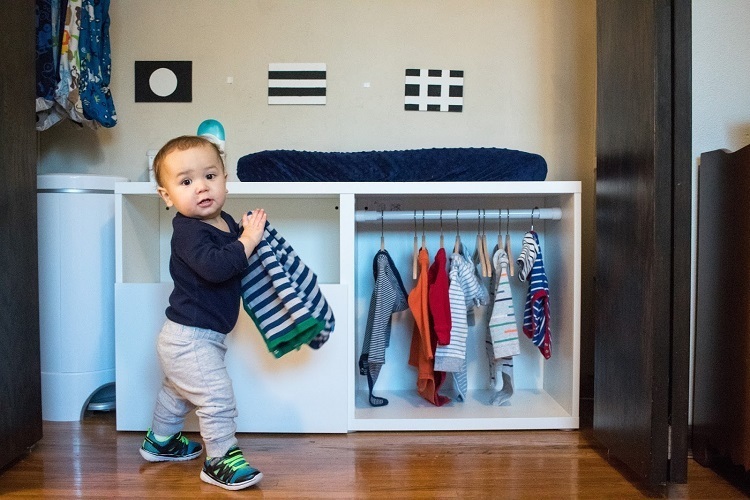 A Montessori-inspired Wardrobe (with bilingual labels)

Last time we relocated, my daughter was around 18 months old. I wanted her to feel that this home belonged to her too. That this was not set-up only for big people, but for little people too. When I prepared the environment for her, one of the most important things for me was that she can access her belongings and use them independently from a young age. It is empowering for a little person to be able to take care of herself and do things alone. We bought this little wardrobe when we moved in, but we could have accentually started much earlier, probably from birth, if we didn’t move so many times (around 10 times actually) in the first 16 months of her life.

You might have already had a glimpse of our Montessori wardrobe (on this blog and also featured on How We Montessori and on Eltern von Mars). Today I would like to show you it’s organized

This wardrobe is child size. My little one can access everything by herself. She doesn’t need to open the door of a big closet or pull a heavy drawer. We use small hangers (child-size) and some baskets to organize the items by category. There is also a little cushion on the floor. She can sit on it when getting dressed.

There is “a place for everything and every thing in it’s place”: pajamas, pants, pullovers, T-shirts, dresses. Each category has a label.

Two months ago, I have added written labels. Before that, we only used pictures.

a picture of a representative item for each category
and the name of the category
I found the pictures on Internet. I looked for pictures of items that she already has. It was easy because the Austrian brand we buy has an online shop. I could have also taken pictures of these items and then print them. My intention here was to facilitate the visual connection between what she wears and the labeling.

1. This reflects our interactions: I use both languages when talking to my daughter

2. Romanian and French are both latin languages and have many similarities. This makes bilingualism a bit tricky or confusing for a little one because for some objects the words are similar, for others they are very different. So I wanted to start addressing this issue in our daily life.

There is a special sign for « nigh-time » associated to pajamas. There is another one for « sunny days » associated to short-sleeves shirts to avoid (almost all the) discussions about « why can’t we put a short-sleeves T-shirt when it’s freezing outside? ». This spring has been challenging because of the changing weather.

You may wonder if having everything accessible for a toddler is more work. It was in the beginning. The first week after setting up this cupboard, there was so much excitement about it that everything was pulled out of the shelves and tried out. It was a bit frustrating for me in the beginning because I didn’t know how long this phase will last. Forever? No. The excitement was gone after a week and in the meanwhile she practiced a lot to get dressed independently. Looking back, I think it was worth the investment in time and patience. It was a great learning experience for all of us. In the long run, freedom and autonomy are priceless for a child.

Our Homeschool Rhythm and Schedule

Reading corners in our Montessori home

Reading corners in our Montessori home

Our Homeschool Rhythm and Schedule