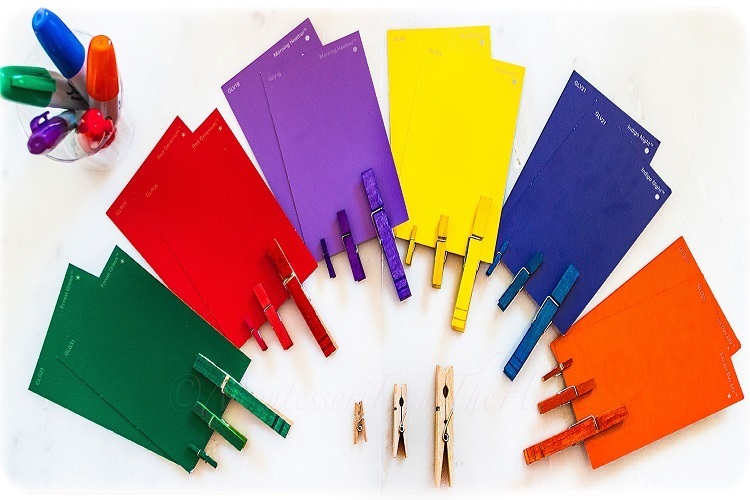 Exploring colors the Montessori way: one week for ORANGE

Two or three weeks ago we investigated the red color in a characteristic way, just by carrying more attention to the red articles around us. We had loads of fun and I needed to keep investigating different shadings with my girl. Normally, I chose to go for orange, in light of the fact that on a pre-winter day, here is the way our kitchen resembles:

A lot of orange vegetables and natural products! So it was exceptionally simple for me to set-up some Montessori exercises for her.

Concerning red, I needed her to investigate orange through the 5 detects: sight, hearing, smell, taste and contact.

Most importantly, I gave her a plate distinctive orange items: various surfaces (delicate little pads, hard articles made of wood, leaves, flowers…), various aromas (a mandarine, a leaf newly tumbled from a tree,…), a few things coming from nature, others made.

I remained silent toward the start, I simply present her the plate. She noticed them a bit, played with a portion of the items, overlooked others. She then, at that point called attention to some of them, I named them and added the color: “the orange blossom”, “the orange cushion”…

On one more day, I arranged a coordinating with movement for her. It took me something like two minutes to set it up. I put in a crate every one of the orange vegetables and organic products I found on our kitchen counter (two bits of each).

I let one of each in the bushel and put the other one in succession. I show the coordinating with movement and afterward welcomed her to do likewise.

Toward the starting she was more intrigued into returning them to the container and coordinating with them inside. Inevitably, she put them in succession and coordinated with them once more. She did it a few times and, in the end she conveyed them back in the bin and made the sets once more. She looked amazingly engaged and drew in with this movement.

When the foods grown from the ground were back in the crate, I ad libbed a bit. I covered everything with a drying towel and welcomed her to pick a natural product or a vegetable without taking a gander at and afterward think about what it was. She could’t care less with regards to my speculating movement. She was centered around concealing the crate with the drying towel and afterward uncovering it, which helped me to remember another Montessori action: the lastingness of articles! I love the way youngsters “plan” their own Montessori exercises, contingent upon their inclinations existing apart from everything else.

At any rate, a considerable lot of the leafy foods wound up eaten, so that drove us to another action: an orange lunch. This one also was 100% made do (once more, in light of the fact that we have such countless orange foods grown from the ground during this season). I understood that nearly everything was orange on her lunch plate: a pumpkin soup, carrots curry and clementines.

One more Montessori movement from our orange week was figuring out how to ring a clementine. Which is an awesome tactile encounter and incredible for rehearsing fine-engine abilities. I likewise loved this is on the grounds that we joined it normally: we had a lot of mandarines, my girl loves them, so I asked her “might you want to chime one?”

The other orange snacks of the week were: persimmons, mandarines, oranges, apples and dry papaya.

And… a carrot cake that we prepared together

Other sensorial and fine engine encounters from our orange week:

purchasing orange roses and orchestrating them in a little container

As during our “red week”, we paid attention to a fall melody from the Music Together “Woodwind Collection” (you can pay attention to the music here).

“Leaves are falling, delicately gliding, tumbling to the ground.

I didn’t have any book about orange explicitly yet we read ordinarily those two by Debi Gliori (the most loved books existing apart from everything else) and we appreciated the orange hide of the little fox and his mother:

“Regardless” (in French: “Je t’aimerai toujours quoi qu’il show up)

The entire week was invigorating, loaded with tones and fragrances. I saw my current circumstance with new eyes and I felt more mindful of shadings around me. Possibly my girl felt that as well?

Presently, fourteen days after our “orange week” and one month after our “red week”, she sees the tones around her. She now and again shows me every one of the red articles she sees and she names the shading. She doesn’t name the orange ones however interesting enough she names the blue ones, in spite of the fact that we didn’t zero in on blue yet. Possibly this will be our next shading to investigate? I don’t know. Which are the “winter tones”? That is more precarious in a district with (basically) no snow.

My goal with these exercises isn’t to show her the shadings yet to bring the mindfulness (hers and mine) to the things and tones that encompass us. Also, see what occurs straightaway…

Baking with a toddler: Carrot Cake

Cooking with toddlers: how to make it enjoyable and fun

When Is The Right Time To Start Your Family

Baking with a toddler: Carrot Cake